Music Authority is excited to announce Nicolai Epichoff from Georgetown University as the winner of our 2019 Music Authority’s Annual Music Lovers Scholarship. To apply for the scholarship, students had to write about their passion for music. We are now accepting applications for the 2020 scholarship award. 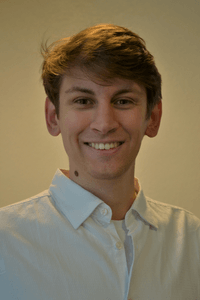 My name is Nicolai Epichoff and I am a Russian-American from Los Angeles who was raised by parents from eastern Ukraine. Off of our little island, we stood out as there were very few immigrant households in our area, let alone any other Russian speakers. Despite occasional hardships, we succeeded in creating a space for ourselves in the community. As a result, I grew up in between two cultures viewed as incompatible and from a young age, I developed the understanding that this experience was particular and not only indispensable but precious.

Having struggled to pay for my undergraduate studies in the United States, I decided to look elsewhere and found an affordable International Relations program in Geneva, Switzerland. After I moved in 2013, my parents moved back to eastern Ukraine. Following the revolution, however, the mayor of the town where they were living warned them that they could be in danger, so they fled to Crimea, only to be caught in the midst of the annexation. Meanwhile, the civil war forced some of my close relatives to flee the warzone, leaving others behind to defend against looters. As for me, I found myself growing more and more emotionally distressed, as I was unable to support my loved ones or help those in need. On top of that, our situation became much more precarious than it had been before as a consequence of the sanctions imposed on Russia and Crimea.

Despite these difficulties, this experience only solidified my determination to pursue a career in the field of peace and conflict. In fact, as soon as I completed my bachelor’s degree, I was eager to dive into the vast network that Geneva has to offer actors tackling these exact issues. I am currently an analyst intern contributing to shaping the peacebuilding behavior in fragile countries and, over the coming summer, I will finally be able to take an active part in reconstruction in eastern Ukraine by getting involved in a renewable energy infrastructure project.

This next fall, I will be coming back to the United States to begin the Master of Science in Foreign Service at Georgetown University with a concentration in Global Politics and Security. It would be an unbelievable opportunity for me to in the future leave a positive impact on the world and this program, to which I have had the privilege to be accepted, would provide me with just that. Nevertheless, given my financial constraints, every little bit would help to make this become a reality. In any case, I am very much looking forward to seeing what the future has in store for me.

Through the Lens of Music

One of my very first memories of music is my mom sitting at the upright piano
that we had in our living room, singing opera while accompanying herself. A trained
musician, she would often practice around us and encourage me and my brother to
experiment with the instrument as well as to try our voices at singing. Inevitably, music permeated my life from a very young age, and by four I had started taking lessons in classical piano from a private teacher. Not much later, I would also take on singing lessons in complement, further laying the foundation of my blossoming music education, which would continue through to my adulthood.

I was fortunate enough to attend an elementary school that took music seriously.
Over the years, me and my classmates were progressively introduced to this world and were given plenty of opportunities of which we could take advantage. Apart from my piano learning at home, I happily attended the optional music class that was offered, in which we were first introduced to the recorder (a moment that all of our loving parents surely adored!). Shortly after, I was presented with the choice between the clarinet and the violin and I decided on a six-year-old whim to go for the latter, most likely because my brother had already claimed the former for himself.

From being rowdy first graders producing screeching sounds on the instrument of
our choice, we matured into slightly less rowdy “upperclassmen” capable of a modicum of coordination. Along the way, some of my fellow violinists switched to cello, and thus we became somewhat of a symphony orchestra. We were exposed to the functionings of this type of ensemble and soon enough we were putting on our first concerts, giving us our first taste of performing in front of an audience. In parallel, both wind and strings students would come together to practice singing for our yearly school musicals, of which The Nightmare before Christmas is still a fond recollection of mine.

As we moved up in the world, things got more serious. In middle school, kids in
the string orchestra were asked to take a chance on new instruments, such as the double-bass and the viola. However, I stuck to my trusty violin. Unlike before, we were being pushed to genuinely try to excel individually and we were taught discipline so as to understand the need to work together as a team in order to also excel as an ensemble. Moreover, students were given first chair of their section in recognition for their work and talent and violins, in particular, were divided into firsts and seconds.

While I was keeping myself busy with multiple concerts and competitions each
year as a part of my middle school orchestra, I was all the while still fully committed to the private lessons that I had continued since my early childhood. At that stage, I had really gotten the hang of playing the piano and I was starting to perform solo concerts. Simultaneously, I reached the peak of my singing career, off of which I stumbled quite quickly as my voice began to crack (puberty did not care about the highest note I could reach). Although I now laugh at it, I am very grateful for my teacher, who recommended me to stop singing so that I would not permanently damage my voice.

As far as my involvement in the orchestra went, we were not actually good until
we got to high school. By then, we had become a well-oiled machine and almost
resembled a bona fide symphony orchestra. The music that we played at our concerts was a lot more sophisticated than it had been before and we were regularly invited to competitions and even performed at the Walt Disney Concert Hall. This was all possible thanks to our outstanding teacher and conductor, who was just as outstanding a violinist and whose experience worked wonders to our musical development.

During this time, I was also involved in the staging of my high school’s musicals,
which stand out as poignant moments of my teenage years. Even though it was the theater class that managed these productions, the music teachers would ask us to participate by playing in the pit. Through this crucible, I was introduced to musical theater and, more specifically, to renowned shows, such as Evita by Andrew Lloyd Webber and Sweeney Todd by Stephen Sondheim. To this day, I still have the motif of “Don’t Cry for Me Argentina” stuck in my head and I still own and wear a green T-shirt with the musical’s logo that we were all kind of forced to purchase.

In the years following high school, as I went on to pursue higher education, one
could say that life threw a few curve balls my way. When I moved away from home, first across the country, then across the Atlantic, I found that I could not dedicate any time to musical learning, but that is not to say that I ever drifted far from music. While it is true that I was not as committed to music as I had been in the past, all of the effort that I had devoted to piano, violin and singing throughout those years was not in vain. As a matter of fact, music helped me through some of my toughest times.

With my family’s experience in the Ukraine crisis, which did not only have an
immensely adverse impact on our financial situation, but also left me feeling helpless as I was unable to support my loved ones in the conflict, I frequently found myself relying on music as an avenue of expression. One particular episode that I still remember quite vividly is the days during which I awaited a response from my parents as they fled from eastern Ukraine to Crimea to get away from the brewing civil war. Worried about their well-being, I was consumed by thoughts of what could potentially go wrong and I would spend hours at the piano while waiting for news from their end. Playing kept my mind off of the negativity and allowed me to get through that week.

Now back to something more light-hearted. Away from home as I have been for
many years, I often cherish going back and listening to specific artists that I identify with my formative years, such as AC/DC, the Doors, Guns N’ Roses, Led Zeppelin and the Rolling Stones. Every now and again, while studying or working out, I enjoy simply putting in my earbuds to let the memories flood back by listening to these bands. In the midst of the Ukraine crisis, they too were always present and contributed to lightening my days when I needed to concentrate or relax the most to get through my university education.

If there is one thing that I know with certainty, it is that music has so far been a
crucial component of my story. At every stage, it has left a positive impact in diverse and oftentimes unexpected yet invaluable ways. I can only hope that I will continue to be surprised by its potential to enrich one’s life and that I will be able to share this passion with others. My education is nonetheless not over, so there will surely be numerous opportunities to do precisely that in the next couple of years.