Best Phaser Pedal for 2023 [Our Reviews and Comparisons]

Are you looking to enhance your skills as a guitarist? If yes, this can be achieved through phaser pedals, which allow experimenting by adding layered effects to create unique music with your guitar. To help you out, we have reviewed the five best phaser pedals available on the market today.

Read further to take your guitar effects to another level.

Our Best Phaser Pedal for 2020 Reviews and Comparisons 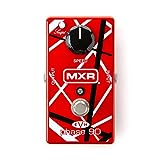 Eddie Van Halen and Dunlop collaborated together to create the updated version of Phase 90 pedal, which is EVH90. This pedal model produces the same great spacey swirls and hypnotic warbles, which is similar to Phase 90.

Built with eye-catching graphics, MXR EVH90 can not only provide the same spacey swirls but also produce distinguishable rings and can tailor the speed of the phases. Another feature of MXR EVH890 is its script logo and block logo. The script logo is for vintage tones and the block logo is to give that modern edge to the tones while playing.

MXR EVH90 has a Script button that switches the pedal from the block logo mode to the script logo mode. This makes MXR EVH90 a ‘two in one’ phaser pedal for the guitars. Besides, the pedal has a single footswitch and large black colored ‘speed’ knob to control the phase effects.

The EVH90 comes with a high price tag. Also, it produces sounds that are not quite varied on musical terms.

TC Electronic Helix Phaser Pedal stands out as one of the most versatile phaser pedals on the market today. It can produce a powerful array of high-quality phaser tones, which enhances your soundscape and music.

Electronic Helix Pedal is a part of the TonePrint series, which is responsible for its versatility. TonePrint allows you to download presets from popular guitarists and to customize your pedal sounds.

With its pragmatic design, this pedal enables you to switch between the classic flavors of sounds producing a melodic and metallic tone.

What We Like About TC Electronic Helix Phaser Pedal

Besides its versatility, Electronic Helix Pedal has another simple yet attractive features like four different knobs and three distinct switch modes. The four knobs control various aspects of the sounds produced – speed, depth, feedback and wet/dry mix of the pedal.

While the three different switch modes – Vintage, Smooth, and TonePrint enable the pedal to produce quite decent and rich sounds compared to other digital phasers. Another likable feature is its analog stereo input and output which creates analog sounds for all kinds of events through its two channels.

What We Don’t Like About TC Electronic Helix Phaser Pedal

The downside of Electronic Helix Pedal is its mixed-signal part, which tends to become inaudible when played under some specific setting. Also, the Helix model lacks the harmonics of the analog pedals.

The Boss Phase Shifter PH-3 Pedal provides a range of vintage and modern effects for unique and one-directional phasing.

The modern and vintage phasing effects of Bose PH-3 include the ‘rise’ and ‘fall’ mode for unidirectional phasing. Also, the function of ‘tap tempo’ is used to sync the different tempos, which is suitable for live performances. Features like speed and rate are usually controlled by connecting PH-3 to an external expression pedal.

What We Like About BOSS Phase Shifter Guitar Pedal (PH-3)

The most impressive feature of Boss Phase Shifter PH-3 Pedal comes with four distinct knobs, and three of them are to control the rate, depth, and resonance. The fourth one is the stage signal knob that allows you to control the shifting limit of the signal.

With this pedal, you can create a varied range of sounds using 4, 8, 10 and 12 stage phasing. This pedal has a variety of controls and because it is easy to use it’s suitable for both beginners and advanced level guitar players.

On the downside, this pedal is not suitable for guitarists who prefer analog sounds, as the Bose PH-3 is more digital. Also, it falls on the expensive side amongst other pedals. 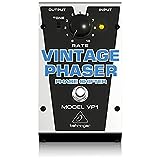 With genuine and classic three-dimensional phase shifting, Behringer Vintage Phaser VP1 is designed in a way to compete with the leading phaser pedals on the market.

Behringer Vintage Phaser VP1 is built with impeccable features such as a dedicated rate knobs and a color switch. These features enable the pedal to produce varied authentic tones, from bubbly rotary effects to jet plane sounds.

The Behringer Vintage Phaser VP1 has simple functioning. Besides, it has a big knob to set the speed of the phasing effect. And to add more definition to the sounds produced in the upward position, the pedal has a tone switch.

Contrary to it is the downward position setting, where the same tone switch allows slow sweep in the tones without causing any change in the original sound. So, from subtle effects to a harsh swirling sound, this pedal has the ability to deliver warm and vintage tones.

What We Don’t Like About Behringer Vintage Phaser VP1

At times Behringer VP1 develops some hiss sounds, which can impact the quality of sounds. Moreover, as a pedal it is not very powerful compared to its competitors on the market.

EarthQuaker Devices Grand Orbiter V2 is built with numerous features, which can make stationary and resonant sounds to slow and mellowed down sounds along with producing fast and swirly music.

This third version of Grand Orbiter V2 is a high-quality analog phaser pedal known for its versatility. It has four knobs to control the resonance, depth, rate, and sweep settings of the pedal.

Also, it has two other switches to change from phaser to vibrato mode and to provide some additional control to the rate-setting.

What We Like About EarthQuaker Devices Grand Orbiter V2

The most likable feature of Grand Orbiter V2 is its four dial controls. Out of these, the rate-setting controls the signal’s speed, while the depth controls its intensity. The sweep control sets in the intensity of the phase to bring out a more relaxed feel from an aggressive one.

And, the resonance control sets the signal’s quality in accordance with its overall resonance, producing a warm effect from a sharper tone. The Grand Orbiter V2 is built to produce distinct sounds from basic to vintage.

What We Don’t Like About EarthQuaker Devices Grand Orbiter V2

Grand Orbiter V2 comes at a high price, as it is a single pedal. Another limitation is its LFO, which affects the power of the rate control when the LFO is disabled.

MXR EVH90 stands out amongst its competitors as the best phaser pedal with excellent features and attractive graphics. This updated version manufactured by the famous Eddie Van Halen and Dunlop produces great spacey swirls and hypnotic warbles.

Despite its high price, this ‘two-in-one’ phaser pedal is worth it because of its exceptional phase effects.
You can also pick any other phaser pedal on the list according to your preference to get the right kind of phase effects.