Best Octave Pedal for 2023 [Our Reviews and comparison]

Are you mesmerized by the bass tones in the tracks composed by your favorite musician? Is that probably why you’ve been playing those chartbusters on loop the whole day. Well, apart from the creative geniuses of these musicians, there’s a gadget playing a vital role in making these songs a treat to the ears – the Octave Pedal.

These devices have undoubtedly empowered guitarists, and amplified the output of humble 4-string instruments too, making them sound magnificent. The deluge of octave pedals speaks quite a lot about the amplifying popularity of these devices, and in a way, these pedals have got shopping portals abuzz.

However, the overwhelming number of octave pedals available could push even gadget maniacs to a state of ambiguity, leave alone the not too tech-savvy. As a result of painstaking research, this compilation includes several best octave pedals.

Our Best Octave Pedal for 2020 Reviews and Comparisons

Want to make your 6-string guitar sound like a 12-string beast? Well, then this Electro Harmonix wonder could possibly be your best find in accomplishing the feat. The Polyphonic Octave generator of this pedal can simply amplify your musical experience to a level that was hard to imagine a few years ago.

The pedal includes Dry, Sub Octave, as well as Octave Up controls, which contribute to the impressive sound output this Electro Harmonix device produces. The result is a degree of volume control that’s unparalleled and crystal-clear sound output.

What We Like About Electro Harmonix Micro POG Guitar Effects Pedal

Although the product delivers every technical ability it claims, it is quite highly-priced. 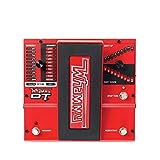 When first introduced across stores, many gadget enthusiasts thought this fancy-looking octave pedal is more show than substance. However, the popularity of the Digitech Whammydtv-01 Micro POG Guitar Effects Pedal proved that it has a lot more to it.

The highlight of this product is that you can experience true polyphonic pitch shifting and whammy effects, an ability a lot of musicians are looking for.

Accommodates a range of musical tricks you may want to try such as the drop tune, whammy bar effects, as well as guitar harmony. Unlike many yesteryear gadgets of its kind, the Whammydtv-01 offers a true bypass. It could be a great addition to your electronic gadget suite.

The DigiTech Whammydtv-01 Pedal is quite expensive, and a significant shipping cost could also be incurred in a bid to bring it to your doorstep. 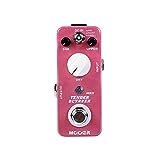 A lot slimmer as compared to many octave pedals today, this MOOER invention has several technical features embedded within its small frame. These include independent SUB, UPPER, and DRY controls.

The makers have included 3 new, unique algorithms that help produce different tones effortlessly, all it takes is just the flip of a switch. The gadget has also been lauded for its true bypass switching ability.

Quite sleek in its design, economically-priced, and inclusive of several interesting features, the DigiTech Whammydtv-01 Pedal has lots to offer that makes it worth the money.

What We Don’t Like About MOOER Precise Octave Pedal

Isn’t the most powerful gadget around, and if you are in pursuit of a pedal that is holistic, you could probably skip considering the Whammydtv-01. 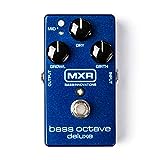 The highlight of this gadget is the adoption of Constant headroom technology (Cht) by the manufacturers, and its exceptional tracking.

Includes a Mid+ switch that adds a significant midrange boost to a frequency selected by the user. In addition, the octave pedal also produces an organic analog tone too that contributes to an excellent music output.

What We Like About MXR M288 Bass Octave Deluxe

Most Octave pedals struggle with tracking low bass tones, and this is exactly where the MXR M288 Bass Octave Deluxe triumphs.

What We Don’t Like About MXR M288 Bass Octave Deluxe

A few customers have complained about grounding issues arising a few months after the purchase, which means the MXR M288’s quality might deteriorate. However, this behavior of the octave pedal has been found to be inconsistent.

If you want to augment your musical creation with an octave, the EarthQuaker Tentacle Pedal is one of the best devices to own. Pairing it with your favorite fuzz, or aligning it with another octave up will help one realize the magic the pedal is capable of creating.

The fact about this product that took us by surprise was its organic manufacture. The EarthQuaker Devices Tentacle Pedal is manufactured by human hands in Ohio.

The most noteworthy feature of this pedal is its octave up that can enhance the quality of your tones to a whole new level.

The most important fact about the EarthQuaker Devices Tentacle Pedal is that it is a simple gadget with almost no complicated controls. All you need to do is just turn the switch on and you are good to go.

What We Don’t Like About EarthQuaker Devices Tentacle Pedal

As far as technical abilities are concerned, the EarthQuaker Devices Tentacle Pedal isn’t as technically sophisticated as several octave pedals available today. However, these little shortcomings can be overlooked.

We hope this compilation of the best octave pedals proved to be useful for each of you. As per our research, the Electro Harmonix Micro POG Guitar Effects Pedal is one of the best gadgets to own.

Even if you own a humble guitar that’s not the best of its kind, this octave pedal can amplify its output incredibly to make the audio output sound incredible to the ears. The gadget is a bit expensive, but the price aspect can be overlooked if unmatched sound quality is what you are striving to achieve.

However, since many manufacturers are flooding stores with their own octave pedals, it’s better you consider glancing through the configurations of a few more before buying one.