The demand for entry-level turntables and record players is higher than ever, thanks to the ongoing boom in vinyl record sales. Vinyl has now outsold CDs for the first time since 1986, indicating that customers are rediscovering tangible music formats. As the demand for record players rises, more manufacturers are providing entry-level models that are designed to appeal to novice collectors. So, which record player should you acquire when you first start out? Much of your decision will be influenced by your budget, but there are a few other elements to think about that might affect your selection and how much money you save before parting with your hard-earned cash.

Let’s take a look at the best starter record player in the market: 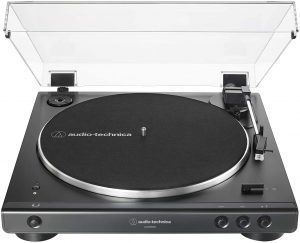 If you’re a newbie on a tight budget, the Audio-Technica AT-LP60XBT is likely your best bet. It has a stylish design and is one of the most popular turntables available today. The AT-LP60XBT is an excellent value. The AT-LP60XBT has Bluetooth built-in and can wirelessly stream music to wireless speakers and headphones.

Despite being a low-cost turntable, it has received positive feedback from Hi-Fi critics and is often regarded as one of the best-sounding turntables in its price range. And, unlike some of the even cheaper alternatives, it hasn’t been known to cause any record harm.

Audio-Technica AT-LP60XBT does not have the most impressive sound. 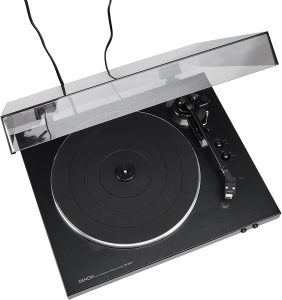 Denon’s DP-300F record player is the most costly on this list, and for good reason: it has easy controls, excellent build, and audiophile-quality sound. Denon’s DP-300F has a refined design that both novices and expert audiophiles will appreciate.

A completely automated turntable is included, with the tone arm moving into place at the start of playback and returning to its original position at the end.

This provides you the assurance that your valuable vinyl will not be harmed, allowing you to relax and enjoy your music. This, together with the easy controls and low installation requirements, makes the Denon turntable an ideal record player for beginners.

While the Denon DP-300F turntable lacks built-in speakers, it does contain a phono equalization that allows it to output high-quality music through external speakers. The only criticism we have about this turntable is that some customers have reported speed inconsistencies during playing. This, however, appears to be fixable with minor changes and isn’t an issue with all turntables. 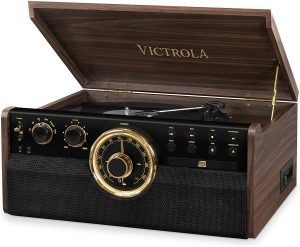 What We Like About Victrola 6-in-1 Bluetooth Record Player

The Victrola record player is ideal if you have a vast collection of diverse music and wish to regularly mix it up, thanks to the diversity of vintage playing modes.

The Victrola system’s sole flaw is that many of the elements appear to be readily breakable, which isn’t ideal if you’re clumsy or have small children in the house. However, if you’re seeking versatility and simplicity of use in a record player, it’s a good choice. 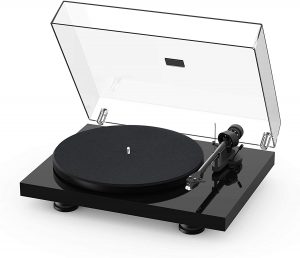 Taking its most popular turntable design and changing practically every feature while raising the price is a risky game, but the Debut Carbon Evo is a triumph of strategic risk-taking that removes all the risk from purchasing your first deck.

Whereas rivals may try to mask a lack of true understanding by boosting their sound, Pro-Ject invites you to explore its enormous sonic spectrum, demonstrating its ability to create a deck that is both simple to listen to and ready for longer, more analytical sessions.

What We Don’t Like About Pro-Ject Debut Carbon EVO

Could sound more energized. Doesn’t always appear to be worth the money. 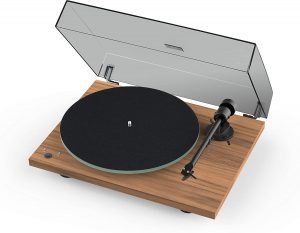 McDonald’s isn’t the only corporation to avoid using plastic; the plinth, platter, and tonearm of Pro-new Ject’s T1 turntable are also free of it.

Of course, this is for different reasons, as you’ll see if you give this deck a try. Few will feel motivated to toss it into the water; instead, this is part of Pro-goal Ject’s to build a well-built and acoustically capable turntable.

What We Like About Pro-Ject T1 Phono SB Turntable

The T1 is great for anybody buying their first turntable or who doesn’t want to deal with the inconvenience of assembly, and it also means you’ll be able to sample the T1’s abilities much sooner after you have it home.

Sparser arrangements, on the other hand, are advantageous because this isn’t the vastest of sound stages and can be congested by a slew of instruments. The presentation may become muddy as a result of the loss of detail.

A better sense of time and organization might assist. The T1 isn’t very clumsy, but it isn’t exactly snappy.

Audio-Technica AT-LP60XBT is the best starter record player according to us. It looks aesthetic and provides excellent value for your money.  However, feel free to choose from the other popular models that we have mentioned.