Explore The Top 5 Guitar Amps That Are Trending

For guitarists, selecting the best guitar amplifier in India is a constant challenge. They frequently settle with poor-quality amps after making the wrong decision. Even though they all have the same appearance, the amps are designed to work well with either electric or acoustic guitars.

Even though you may use them on either guitar, there are a few considerations. Don’t choose the guitar amp you initially plug into if you are currently shopping for a guitar.

Here is a detailed guide to assist you in choosing the guitar amplifier that sounds the finest and also offers the most value for your money. 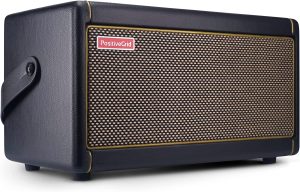 The Positive Grid Spark, which entered the market in late 2019, completely altered the way home practice amps looked. Don’t be deceived by this simple 40W amp’s similarity to other practicing equipment on the market; it actually hides some pretty cutting-edge technology.

With the Spark app, this tenacious little amp transforms into the perfect practice tool. Powered by the renowned BIAS tone engine, this amp can replicate some of the most well-known tube amps and effects of all time.

One of this amp’s most impressive features is without a doubt the ground-breaking Auto Chord function, which lets you determine the chords for any song on Spotify, Apple Music, or Youtube.

While your amp will jam along with you thanks to the Smart Jam function, which meticulously analyzes the notes you’re playing and generates a backing track in the style of your choice. In addition to all of this, the app offers access to over 10,000 tone presets. 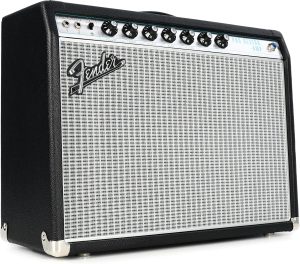 The ’68 Custom Pro Reverb, the first of two Fender ’68 reissues on our list, provides some truly fantastic vintage Fender amp tones. You can easily enter surf territory with a bias tremolo and tube-driven spring reverb tank, but owing to the lengthy spring length, contemporary ambient washes aren’t off-limits either.

When it comes to vintage Fender combinations, clean tones may be what spring to mind, but turning up the volume still adds a lot of hair to the mix. The 40-watt power rating, though, means that lower volume levels aren’t exactly quiet. And at this end of the spectrum, there’s plenty of clean headroom if you want to utilize delay and reverb pedals without experiencing too much compression or let fuzzes and drives truly speak for themselves. 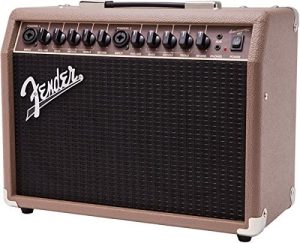 We were eager to see how the 40-watt, solid-state Acoustasonic 40 performed because Fender has a long history of making amplifiers, but their reputation has mostly been built on their electric guitar tube amps. This amplifier looks the part, no doubt. Its appealing brown Tolex finish is common on many acoustic amps, and as to be anticipated from a Fender, the fit and quality were excellent.

The clear tones were outstanding. The two 6.5″ speakers accurately replicated the Sitka spruce punch from our Martin D10, without ever seeming overbearing. With just a little adjusting, the EQ was also able to capture the warmth that this instrument offers with gentle strumming. We were able to tune in the EQ to appropriately convey the dazzling highs we receive from this guitar when it’s unplugged.

Because the Acoustasonic 40 has a second input, we were able to test the vocal response and were really pleased. We were able to dial in for both the guitar and the vocals at the same time since the second channel has its own EQ setting. This amp’s built-in effects were restricted to a basic reverb that was controlled by a rotary dial, but in all honesty, that was all it needed.

It had a good depth from the reverb, which never sounded forced. There is an aux in that will enable you to play along with a backing track. If necessary, you can also connect this amp to your PA system to utilize it as a monitor. The Fender Acoustasonic 40 provided us with a fantastic balance of use, power, and cost and is the best guitar amplifier according to us.

Almost every acoustic guitar player will find this amplifier to be practical and suitable for their requirements. The convenience of attaching media players for backing tracks makes it an appealing proposition for a solo musician. The power and overall volume make it suited for everything from bedroom practice to modest indoor shows. 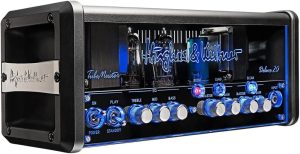 When superior German engineering meets high-fidelity guitar tones, you get Hughes and Kettner. One of the most well-known Hughes and Kettner models to date, the TubeMeister Deluxe, which was first introduced in 2016, flawlessly combines beautiful clean tones with very expressive gain sounds.

There is more than enough gain available for most applications, and by adding a “lead boost,” you can crank up the overdrive to an entirely new level. But don’t worry; despite the quantity of gain, the tone never becomes harsh or fizzy.

The technology that is concealed on the amp’s rear is exactly where the TubeMeister excels. The highly smart RedBox AE DI is hidden on the rear panel. With the help of this clever function, your excellent amp becomes the ideal studio partner. This switchable DI output enables you to alternate between classic and contemporary modes while simulating either a 4×12 or 1×12 cabinet. Of course, you can also disable this function, but given how appealing it is, we wonder why you would. 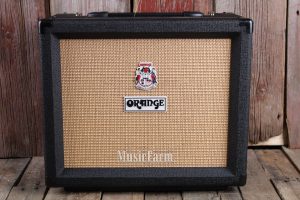 Orange could appear to be the occasionally overlooked British amplifier brand that comes in second to Marshall and Vox’s heritage and powerhouse status. However, they provide a tone that straddles the two, giving the best of both worlds. The tone is ideal for rock ‘n’ roll since it is energetic but not too bubbly.

The Orange Rocker 15 is made to seamlessly transition between the bedroom and the stage, something Orange has mastered with the Terror series. It does this by reducing its output from 15 watts to an incredibly neighbor-friendly 0.5 watts. Additionally, the “natural” channel has a single volume control, similar to the AC30, and is intended to let your guitar’s natural tone come through. On the other side, the “dirty” channel is a little more conventional, with a three-band EQ, gain control, and master volume. To hear those ear-melting rock tones, turn up this channel.

What Is Better, Solid-State Or Tube Amps?

Although there has been discussion about this issue ever since the invention of the transistor, the market for tube guitar amplifiers has recently been severely damaged by advances in digital modeling technology. There is also no disputing that smaller, lighter amplifiers are getting more and more popular, and that volume restrictions at live venues have been considerably tougher.

However, putting aside their practicality and ease, vintage tube amps continue to be incredibly inspirational and sentimental. Even high-end modelers still struggle to replicate their dynamic responsiveness, feel, articulation, and harmonic intricacy.

The market is filled with a wide variety of guitar amplifiers. But just a tiny portion of the product items continue to attract increasing numbers of customers. You could want to give the guitar amps stated above a try as guitarists already like them on the market.

TOP RATED BEYERDYNAMIC HEADPHONES YOU MUST CHECK OUT