The Fender Telecaster is a classic design that is employed in a variety of genres such as country, rock, and pop music.

Because of its success, the Telecaster, also known simply as the Tele, has inspired numerous manufacturers other than Fender to create similar-looking guitars. The copycat Telecasters seem identical, but they are frequently less expensive than the standard American-made Fender Telecasters. Some even have significantly varied pickup configurations for a more diverse tone.

With so many different Telecaster-style alternatives available, selecting the perfect one can be difficult – especially for beginning players. We did the research and found some terrific solutions at all price points to help you make the best informed choice. 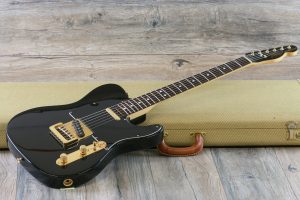 Telecasters and classic rock have always gone together like bacon and eggs. ‘The Boss,’ Bruce Springsteen, is never seen without a magnificent Telecaster Standard around his neck. The original Fender has survived every stylistic transition in rock from the 1950s to the present. It was the model that gave life to the firm and influenced the design of the Precision Bass and Stratocaster. Above all, the Telecaster Standard is the Telecaster for everyone. Because of its timeless tone and adaptability within the rock genre, it covers a lot of areas.

Country music comes to mind after rock ‘n’ roll when discussing Teles. In the world of country music, the Telecaster plays an equal (if not greater) importance. Many big-name country-pop idols, including Brad Paisley and Kenny Chesney, adore the vintage Telecaster Standard.

Paisley has his own unique model, complete with a custom-wound ’64 Tele bridge pickup for added western flair. In truth, customizing a Tele is not a new concept in the nation, with many players choosing alternative body woods and pickup changes. Even though the Tele Standard is still the most popular choice for country players, Fender’s Thinline Model delivers a really distinct country tone. The Thinline is a hollow-body Tele variation with the same ash body as the Standard. This lightweight variant has a warmer and more resonant Tele tone.

The Telecaster was more than ready to storm the gates of Metal and Punk after dominating the realms of rock and country. The rising popularity of heavy rock in the late 1960s meant that the Telecaster’s single coils couldn’t compete with the thick sound and prolonged sustain of humbucking pickups. The Telecaster Deluxe was conceived as a result.

The Deluxe was a Tele-style guitar with two humbuckers, a heavier solid body, and two-tone and volume knobs. The design was inspired by Gibson’s Les Paul and included a Stratocaster headstock. Famous players included Fall Out Boy’s Joe Trohman, who faithfully followed the model throughout the band’s lengthy pop-punk career.

Aside from twangy licks and violent riffs, the Telecaster can also keep it smooth. Prince was the funk king, and his Telecaster of choice was the Hohner Madcat. This leopard print funk machine was a Tele Standard counterfeit from Japan. The Madcat had all of the same qualities as the Standard, except it had a maple body rather than ash or alder. The proximity of the bridge pickup to the bridge generated a distinct tone with the ideal honk for funk.

The American Professional II Telecaster includes a slew of new features, including redesigned pickups and a revised neck shape, but let’s start with the basic Telecaster attributes. The Telecaster’s general form is the classic Telecaster shape: a single cutaway solid body shape with thin shoulders. The new edition, however, has a contoured neck heel on the backside, which isn’t visible from the front side, but as you go up to the high frets, the contoured neck heel definitely makes playing a lot easier.

Another addition to the guitar is the Deep C neck shape, which has a more round back contour. The Deep C neck profile is quite comfortable in your hand, and many owners of this guitar agree that it is more comfortable than the preceding Modern C neck shape. Fender also included a “Super-Natural” satin finish on the neck, which is yet another feature that will enhance your playing experience with this guitar. 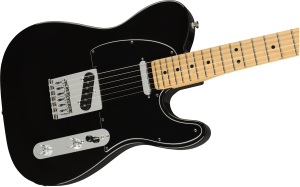 Because of its low price and good quality construction, the Fender Player Series Telecaster is the brand’s most popular Telecaster in terms of sales. While this isn’t a Telecaster alternative (because it’s built by Fender), it is a Mexican-made affordable Telecaster based on the complete American-made version.

The Player Series Telecaster is as classic as it gets for this style of guitar, although it does include some modern touches. Most Telecasters, for example, have 21 frets. The Player Series increases it to 22. The neck is designed in Fender’s current C-shape, with a 9.5″ radius fingerboard to make chording easier. And the improved Fender sealed tuners do a good job at keeping your strings in tune.

Consider the Squier Affinity Telecaster for individuals on a restricted budget who want to keep their Telecaster as near to the Fender family as possible.

Squier is Fender’s more economical guitar line, allowing beginners to experiment with instruments without breaking the bank. Fender’s purpose is to get you hooked on the instrument so that you may eventually upgrade to a genuine Fender Telecaster. If you don’t look too carefully, the Squier Affinity Telecaster resembles the Fender Player series. Fender’s beautiful colors, like the Butterscotch Blonde finish, are also available on the Squier.

The Squier Telecaster, like its Fender counterpart, is exceptionally comfortable to play, which is essential when first learning an instrument. Instead of 22 frets, the Squier has a more typical 21-fret configuration. The Squier has the standard arrangement of two single-coil pickups. These actually sound pretty excellent for the price. Two knobs control the volume and tone. Squier (Fender) has found out how to make an entry-level guitar that looks and sounds amazing. 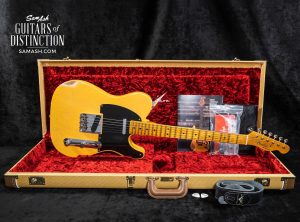 The 70th Anniversary Broadcaster has a 2-piece select ash body with an off-center seam, which provides a wonderful foundation for optimal resonance and allows the notes to sing.

The Nitrocellulose Lacquer finish with relic’d body is quite thin on the body and does not interfere with the Telecaster’s resonance. When you take the Telecaster out of the vintage tweed hardshell case, you’ll notice how light it is – always a good indicator of a high-quality instrument. Two hand-wound Custom Shop ’50-’51 Blackguard single coil pickups are included with the 70th Anniversary Broadcaster. The pickups are wired in a ’51 modded Nocaster style with a blender pot, and the neck position provides a somewhat stronger tone for rhythm guitar.

The Fender Ultra Telecaster has a unique bonded alder body with a balanced blend of lows, mids, and highs. Fender put a lot of effort into making sure that the playing experience is the greatest it can be, and the Ultra Telecaster comes with belly and arm curves for maximum playing comfort, especially while sitting down with the guitar for extended periods of time.

The maple neck has a comfortable 10″-14″ compound radius with 22 medium-jumbo frets, and the fretboard has been improved as well. The fingerboard has excellent details and rolled fingerboard edges for playing comfort. The Modern D profile, which replaced the original D neck profile on older Telecasters, is the true standout.

The Modern D Profile differs from the previous variant in that it has relatively shallow shoulders rather than the classic flat-back with square shoulders.

Different players will prefer different neck profiles, however, the Modern D neck profile will be better suited for guitar players switching from C-shaped neck profiles. Furthermore, the silky Ultra Satin finish allows you to glide up and down the neck without dragging, and you’ll be able to get from the open string position to the 22nd fret in a moment. The taper neck heel is the final neck modification, and it will be a tremendous assist in the higher register of the guitar.

We hope our top 5 picks will help you choose a Fender telecaster guitar that suits your budget and playability.