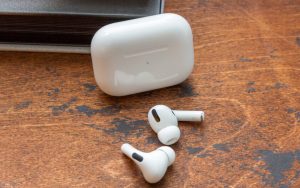 The Apple AirPods Pro 2 is the second version of what has grown to be a real wireless headphone industry standard over the years since the initial model was introduced. They stand out from the competition right away because of their incredibly seamless interaction with iOS and iPadOS devices, highly effective active noise cancellation (ANC), and all-day comfort. 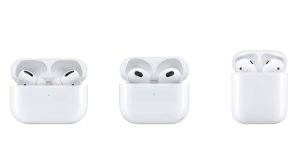 From Left to Right:

Apple makes some significant improvements in the AirPods Pro 2, including enhanced ANC, longer battery life, superior fit, and easier charging. Even though they don’t have quite as many features as other competitors, if you already possess an iPhone, they should be at the top of your list of potential purchases.

The AirPods Pro 2 is the top-of-the-line in-ear model of the AirPods, much like the originals. They have silicone tips that press into the top of your ear canals to offer some passive noise isolation, unlike their ordinary, non-Pro stablemates.

With small stems sticking out from an oval-shaped body, many black sensors and grilles sprinkled all over the body of each bud, and ear tips that clip on and off with a satisfying click, the physical form of the buds are identical to that of the previous iteration.

There are many new features and upgrades elsewhere, though.

The external microphone ports have been moved by Apple to enhance voice recognition and noise cancellation, and the company has also included the option to change the volume simply by sliding your finger up and down either of the earbud stems.

Apple now includes an additional tiny pair of ear tips for people with pixie ears in addition to four sizes of ear tips in the package, one more than before. A speaker and an attaching hook for a lanyard loop have also been added to the charging case.

Apple has improved the H2 chipset within the earbuds, bringing more potent computational audio that enables adaptive transparency and “2x” better noise cancellation (Apple’s claims).
Additionally, the charging case now includes UltraWideband built-in, allowing you to monitor and find it exactly like an Apple AirTag. There is also a new “high excursion” driver.

Last but not least, charging may be done wirelessly or with a Lightning port using MagSafe and Qi-compatible chargers. You can even use your Apple Watch to charge the case if you have one. 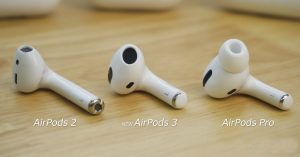 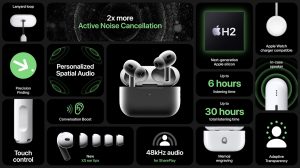 With their white, bulbous housings and short, stubby stems, Apple’s AirPods Pro 2 earbuds will be easily recognizable to most people since they don’t alter significantly from the original AirPods Pro earphones.

They are kept in a case with an additional battery that charges the earphones while it is closed, much like other wireless earbuds. When the buds are placed inside the case, they will quickly charge and provide an hour of listening time for every five minutes that they are there.

The speaker grille on the bottom edge, which produces a sequence of beeps when you hit Play Sound in the iPhone Find My app, and the new lanyard attachment point, which is on the right side of the case and allows you to hang the case around your neck or wrist. If you’ve lost your headphones anywhere in the home, you may use this together with the U1 UltraWideband chip to locate them.

The Apple AirPods Pro 2 are still incredibly comfortable, and thanks to their IPX4 classification, they are also resistant to perspiration and light rain. The included rubber tips provide a light feel, and they may be worn for extended periods without experiencing ear pain or weariness.

This pair of AirPods Pro also has the acoustic equalization vent that was initially found on the first AirPods Pro, which lessens pressure build-up that may be uncomfortable with some in-ear headphones while also balancing how loudly the buds pick up sounds like your breathing or eating.

The AirPods Pro 2 are very packed in terms of additional functionality. The buds include wear detection, as you might think, so when you take them out of your ears, your music or podcast will halt. Additionally, the pressure- and touch-sensitive controls included in the earbud stem let you manage your media.

A single press of either stem stops and starts the music; a double squeeze advances you, and a triple squeeze returns you. You can switch between ANC and the new Adaptive Transparency mode with a squeeze and hold, and you can call Siri by saying “Hey Siri.”

But the biggest change in terms of controls is that you can now change the volume by swiping your finger up and down the stem. During testing, this functioned well and allowed you to make minor adjustments without taking your phone out of your pocket. The Settings app on your phone even offers some customizability, and the AirPods Pro 2 now has a section of its own.

The lengthy squeeze on each earbud may either activate Siri or noise cancellation, and for the latter, you can select between Noise Cancellation, Transparency, and Off. There are no EQ options to customize. 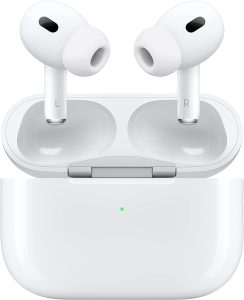 Better ANC is one of the main selling points of the AirPods Pro (2nd generation), and they live up to Apple’s claim of being the biggest enhancement. They easily outperform the original AirPods Pro and are on par with devices like the Samsung Galaxy Buds 2 Pro in terms of performance.

As always, finding ear tips that fit properly is essential for having the greatest experience. To assist with this, iOS has an ear tip fit test. Adaptive Transparency, which depends on the H2 chip, is a further improvement that Apple highlighted in its release statement. When turned on, Adaptive Transparency lets background noises get through to your ears until strong, abrasive noises like construction activities are picked up by the earphones.

In our experience, it works well; the sounds are still heard but not as loud. The Adaptive EQ function is especially advantageous for the buds (which the first-gen AirPods Pro also has). It is always on and continuously modifies the sound of the earbuds to suit your environment, ear shape, and how well they fit.

The reviews for Apple’s most recent in-ear headphones, the AirPods Pro second generation, were overwhelmingly good (including here on Forbes). The noise-canceling was quite effective, and the critics also commended the standout features and long battery life.

However, as a result of their AirPods Pro 2’s misbehavior, some consumers are currently responding less favorably. Certain users have experienced audio drifting.

Some people are attributing it to spatial audio, although it is certainly not what that function is intended to do. Others have noted that the volume levels seem to fluctuate almost haphazardly, and they have emphasized that this is not a result of Spatial Audio or the wonderful dynamic head tracking capabilities because they have disabled these.

Which is all concerning. Apple hasn’t yet commented on this problem, indicating that for the time being at least, it’s a very uncommon occurrence. Let’s hope it stays that way.

Though they appear to be almost similar, the first and second iterations of the AirPods Pro include a few subtle variations.

Along with the standard small, medium, and large tips, the AirPods Pro (2nd generation) now comes with brand-new ultra-tiny ear tips. This will be helpful for comfort and isolation if you have small ear canal openings.

Support for Apple’s Spatial Audio technology with head tracking is another feature that the original AirPods Pro lacked. With head tracking turned on, this is Apple’s take on Dolby Atmos for headphones. It produces a surround-sound impression and makes whatever you’re listening to feel like it’s emanating from a single spot in front of you.

Spatial Audio may now be “personalized” by scanning your face and ears with the front-facing True Depth camera on your iPhone.

Technically speaking, your microphone performs better than the AirPods Pro (1st generation). To acquire it, though, you have to give up realistic voice reproduction. As a result, the person on the other end of the phone may hear less background noise at the risk of hearing less of you. You may hear for yourself by listening to sample street and office recordings made with the original AirPods Pro for comparison.

Charging Case – Similar to the charging case for the original AirPods Pro, it too has certain modifications. The casing and the earphones are now both rated IPX4. So, it shouldn’t matter if it splashes, drips, or even lightly rains. The box also has a lanyard loop for securing the case to a belt or backpack.

Finally, a speaker built into the casing may play tones when Bluetooth pairing is complete or the battery is running low in addition to making a sound to assist you to discover it.

When wearing these earbuds regularly, you won’t notice any significant changes either. The second-generation AirPods Pro shares the same stemmed design as the first AirPods Pro. Although this is a minor inconvenience with practically all stemmed earphones, they can occasionally snag on hair, masks, and other objects.

The original and second iterations of the AirPods Pro have generally similar designs, which is good. Apple didn’t have to invent the wheel in this situation.

According to Apple’s press release, the AirPods Pro (2nd generation) features better sound quality than the original AirPods Pro (1st generation). Once more, the distinctions are negligible. nonetheless, in our tests, we found that the second-generation AirPods Pro had a little stronger bass enhancement.

Apple also claims that the AirPods Pro is powered by a new low-distortion driver and customized amplifier (2nd generation). Although the newer AirPods Pro has less total harmonic distortion overall, you probably won’t hear much of a change.

Both models lack a genuine custom equalizer, as should be noted. There are a few settings available on Apple Music, but that’s it.

TOP RATED BEST BEYERDYNAMIC HEADPHONES YOU MUST CHECK OUT

TOP RATED SONY HEADPHONES THAT YOU CAN BUY IN 2022