The best surround sound systems bring sound from all directions into your home theater, giving you a completely immersive experience. Good surround sound speakers may make you feel like you’re right in the middle of the action in your TV room, game room, or home theater since everything sounds more lifelike.

While the overall sound quality is crucial, there are additional factors to consider when selecting surround sound speakers. Surround sound systems are available in a variety of configurations, including 5.1, 7.1, and 9.1 combinations. A 5.1 system consists of a woofer and five speakers (front left, front right, front center, surround right, and surround left), with bigger installations containing even more speakers. When trying to connect many speakers to a single source, connectivity can be a major issue, so double-check that your speakers will work with your receiver. If not, be sure to check out our top recommendations of the best surround sound systems for the finest stereo receivers to complete your system.

Sony’s HT-ST5000 is the ideal audio complement for Sony TVs if you don’t want to skimp on your AV gear. It’s an audio powerhouse with a few surprises up its sleeve, and it’s jam-packed with features.

For Spotify users, there’s also a dedicated ‘Music Service’ button that can be used to immediately transfer whatever you’re listening to on another device to this primary, powerful speaker system.

Sony ST5000 is expensive and only supports Google assistant. 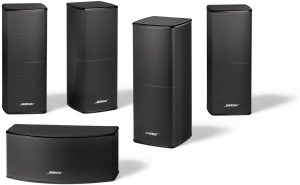 Bose is recognized for producing all-in-one audio systems that are small and portable. However, when it comes to high-end home entertainment, their business model fails miserably. It seems to be the reason that if you want a powerful, all-encompassing sound, you’ll need a set of huge, prominent speakers.

If you’re a real movie enthusiast who won’t compromise on sound quality, the Lifestyle 600 is your only option.

This may not be the greatest option if you’re searching for a system that will be utilized mostly for music. Almost all music is recorded in a two-channel stereo mix. You won’t be able to enjoy all of the Lifestyle series’ amazing features unless you’re listening to surround sound media.

The JBL Bar 2.1 Deep Bass is a basic speaker. It’s a single soundbar and wireless subwoofer that can broadcast music through Bluetooth.

The JBL Bar 2.1 Deep Bass provides a reasonable recreation of your neighborhood movie theater in the comfort of your own home. The absence of surround sound (simulated or otherwise) is a minor annoyance when contrasted to the massive impact that its powerful sub can deliver.

The  JBL Bar 2.1 Deep Bass is not ideal for music enthusiasts. 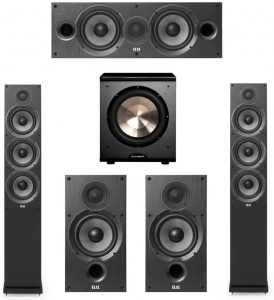 The Elac Debut 2.0 speakers are a revised version of the original Debut speakers from 2016. The MDF cabinets’ internals, as well as the drivers themselves, have altered. What hasn’t changed is their subtle elegance from head to toe.

At this price, some speakers could push a forward or forceful sound to make the owner feel like they’ve purchased anything. It’s delicate and well-balanced, with no single frequency range taking center stage, yet it’s nevertheless quick and fast.

There are certainly more costly surround sound speaker alternatives available, all of which would be considered a “splurge.” If money isn’t an issue,  other several choices may cost hundreds, if not tens of thousands of dollars. However, we’re emphasizing “splurge” choices for everyone for the sake of practicality. The Definitive Technology ProCinema 800 is a powerhouse that outperforms its price tag.

The simplest way to define Definitive is that it is detail-rich, retaining the authenticity of a soundtrack while enabling all of the simultaneous effects to be heard and appreciated.

What We Don’t Like About Definitive Technology Pro Cinema 800

You might hear some distortion when you crank up the volume.

The Bose Lifestyle series is highly recommended or the best surround sound system according to us if you want the greatest audio system available. In general, systems in this price range are quite complicated. However, they’ve taken a difficult problem and made it simple for customers. You won’t be trapped with a highly specialized system that suddenly becomes inferior if you transfer it to another area or rearrange the layout since it’s so simple to calibrate.

We hope this review on surround sound systems helped with making an ideal choice!